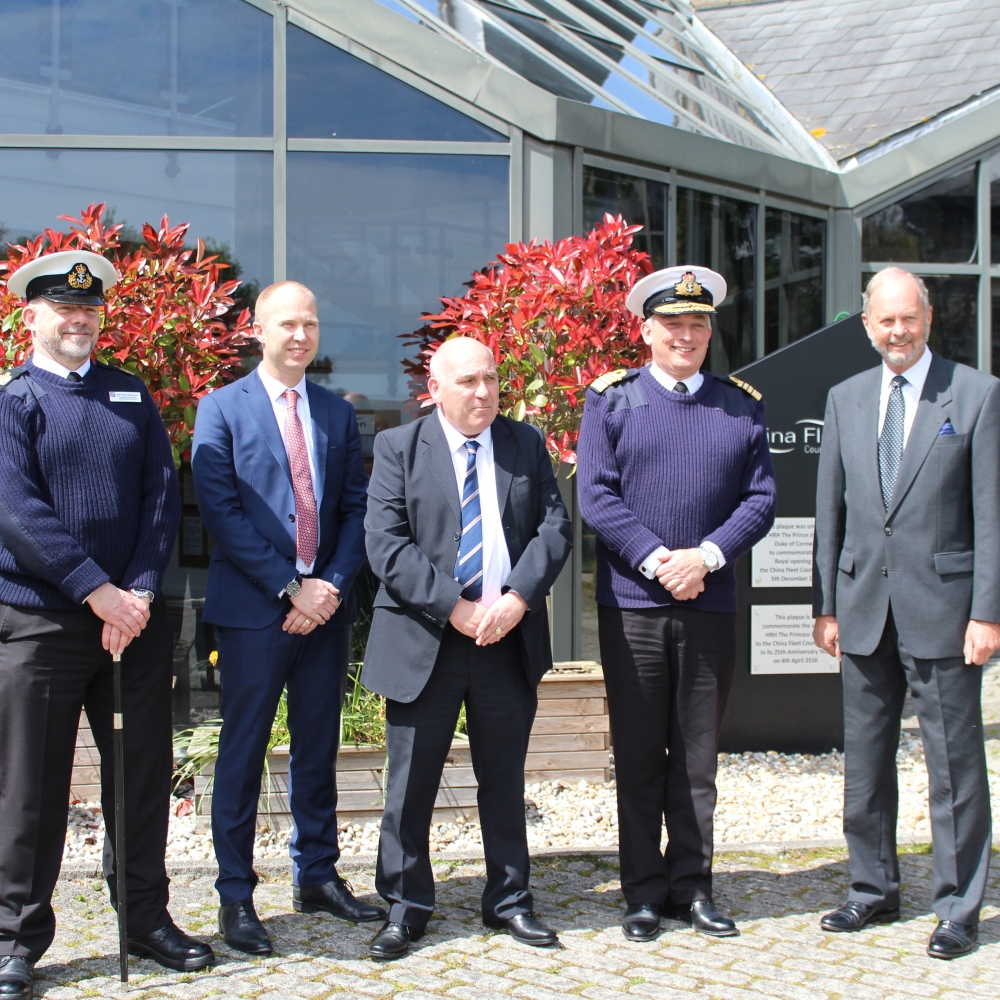 The Sea Lord (accompanied by the Warrant of the Naval Service, WO1 Nick Sharland) was welcomed by the Chairman of the China Fleet Trust, Admiral Mike Wood CBE, DL, JP and its CEO, Alex Sharpe MBE. Admiral Wood said, “The Club has enjoyed several Royal visits but this is the first ever visit of a serving First Sea Lord. We are delighted to show him what we do for the Royal Navy & Royal Marines and their families”.

The Sea Lord was there to officially open the Club’s recently refurbished apartments and was impressed by the 41 self-catering apartments that have had over £1m spent on them as part of an overall £4m investment. Admiral Wood thanked all involved in the refurbishment and acknowledged the support of RNRMC and stressed the importance of collaboration between service charities sharing the same beneficiary pool. He also took the opportunity to use the occasion to hand over a cheque for £3,605 raised at a recent Fundraising Ball held at the Club in aid of RNRMC to Commodore Chris Steel CBE who is an Ambassador for the RNRMC and was representing them at the event.

Admiral Sir Philip Jones also presented 3 “Outstanding Achievement” awards to staff at the Club in Saltash, who responded to a local Club member who suffered a heart attack on the Golf Course last year, where they had to administer CPR and utilise the Clubs defibrillator to revive him. Lara Orgaki – Duty Leisure Manager, Laura Townsend – Team Leader (Leisure) and Jane Young – Sports Coach showed great professionalism and their quick reactions undoubtedly saved his life.

The China Fleet Trust is a registered Military Charity, who own the China Fleet Country Club in Saltash and provide Royal Navy & Royal Marines personnel and their families with leisure, goif, wedding, functions and accommodation services. In order to support their charitable activities they also welcome civilian members, thereby supporting the charitable objective whilst embracing the military covenant.

A sincere thank you to the First Sea Lord, Admiral Sir Philip Jones and the entire team for a wonderful afternoon.

On the Devon and Cornwall boarder on the banks of the River Tamar, China Fleet Country Club is one of the South West’s leading country clubs. With award winning golf, spa, beauty, gym, exercise classes, accommodation, bistro & brasserie, the Club is set in 180 acres of stunning Cornish countryside near Plymouth.